This startup could be the future of Singapore’s tuition industry Everyday, thousands of students in Singapore trot off to remedial classes on a mission to boost their grades. As a result, the tuition industry – as it’s called in the country – is worth US$810 million.

That’s how much parents shell out to tutors and tuition centers around the island, just so their kids can get into branded schools – or at least keep up with their peers.

The paper chase has benefitted tutors. In fact, many public school teachers – well-paid to begin with – moonlight as tutors to earn extra income. Some even leave the classroom to conduct tuition full-time, due to the better money and saner working hours.

Yet despite the buzz, the way tutors seek customers hasn’t changed. They rely on word-of-mouth, Google Ads, and billboard advertising to promote their services. Tutors also engage agents who charge commissions for referrals.

“We can tell you which of your neighbors are teaching tuition. You can just take a lift ‘downstairs’ to join a small group tuition every Sunday,” he says. ManyTutors aims to make the industry more efficient. It helps tutors with marketing by exposing their services to a sizable audience – the site currently gets between 350,000 to 600,000 pageviews a month.

Weichang claims the site lowers the tutor’s customer acquisition costs. A google ad for tutoring services in Singapore costs about US$3.70 per click. It’s lower than loans and insurance for sure, but then again, what tutors can earn from each click is much less too.

For private tutors, listing classes on ManyTutors is free, though tuition centers have to pay. The site collects a fee from tutors for each student referral, which is half of what tutors charge students in the first month (that’s the standard rate in the industry).

ManyTutors also wants to help tutors make more money. They can start group classes on the website, and the whole point here is that they’ll be able to make more money than if they teach students one-to-one, which many tutors now do.

On the flipside, parents pay less by signing up their kids for group classes, though they get less individualized attention.

The site claims to simplify the process of finding and joining tuition classes. While parents can’t pay for the classes on the website yet, everything else, from searching groups by location, evaluating the tutors, to signing up for classes, can be done online.

“We are going to make booking tutors as easy as hotel booking,” says Weichang.

He knows his shit 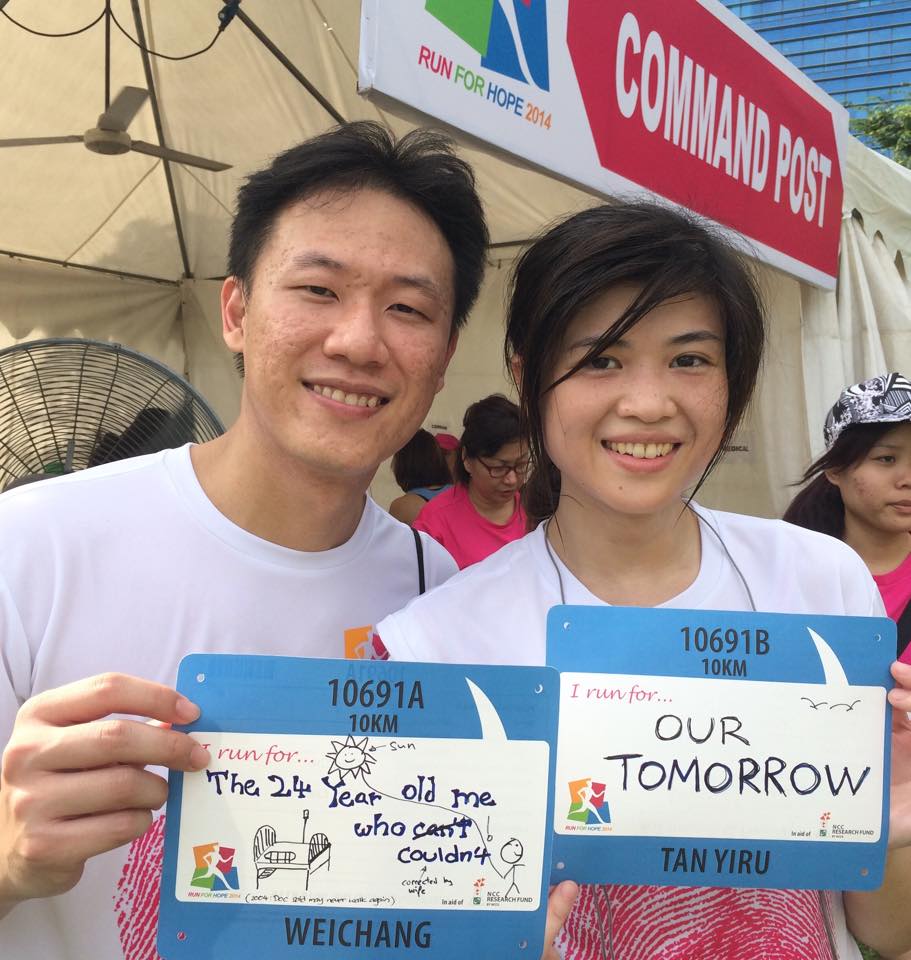 Weichang with his wife Yiru. He was struck with cancer and couldn’t walk. Now he’s fully recovered.

Weichang deeply understands Singapore’s tuition industry. After all, he’s been running a tuition business for more than a decade, under the same website: ManyTutors.com.

By 2006, ManyTutors became a eight-person tuition agency which made US$73,000 a year by matching tutors to students. Weichang was still in college then.

Years later, he transitioned it into something like a platform, where instead of hiring in-house coordinators, the business charges external agents a fee in exchange for a steady stream of prospects.

That model is still alive, catering to tutors who only want to teach individual students. ManyTutors’ third and latest evolution, that of a marketplace for group tuition classes, is his attempt to combine the old with the new: his deep experience in the tuition industry, and the bright lights of scalable internet businesses.

The idea might look like a no-brainer. It sounds like just another Airbnb for X. True, but ManyTutors already has early traction. Weichang claims he has a database of 40,000 tutors, which is sizeable considering Singapore’s school-going population (excluding university students) is around 700,000.

The site lists around 3,000 class vacancies a month, which he estimates is between 5 to 15 percent of the market. He didn’t disclose growth rates, and the site isn’t making much money yet, given the marketplace only launched late last year.

Reaching financial sustainability won’t take much though. Weichang estimates the marketplace will need to match just hundreds of jobs a month to support his small team.

Suppose it collects US$75 per job in referral fees. That translates to a monthly revenue of US$37,500 for 500 job matches, and that excludes the money it’s already making from its old business. A natural entrepreneur, Weichang has dipped his toes into many other businesses. He started Pinkcube, a toy retailer that’s now run by his wife.

He founded Linkcious, an easy-to-install widget that recommends products on ecommerce sites. It received a small grant from the Singapore government, though it remains just a “fun project.” He’s devoting most of his time to ManyTutors.

Weichang hasn’t raised any money for ManyTutors yet, but he plans to start conversations soon. He has bigger plans for the site, which means he’ll need financial support.

The site already has a database of 3,000 music tutors. It could venture into art, dance, or any kind of lessons for kids. “We’ve no timeline but it’s not very difficult,” he says.

Expansion into other cities is in the works as well, and Asia is a haven for Tiger moms.

Naturally, a business like ManyTutors may seem like it’s promoting an exam-obsessed culture that’s the exact antithesis of creativity and entrepreneurialism.

But you can counter that there are greater forces at work, and that the very nature of Singapore’s education system and the pressure parents put on their kids is what feeds the tuition monster in the first place.

Weichang, for his part, doesn’t accept that a tuition culture stifles creativity. Compared to their parents, Singaporeans today have more resources and security to pursue creative endeavors.

“They can watch online courses, build robots, program AI stuff at home, and more […] I feel that people generally blame the system too much here,” he says.